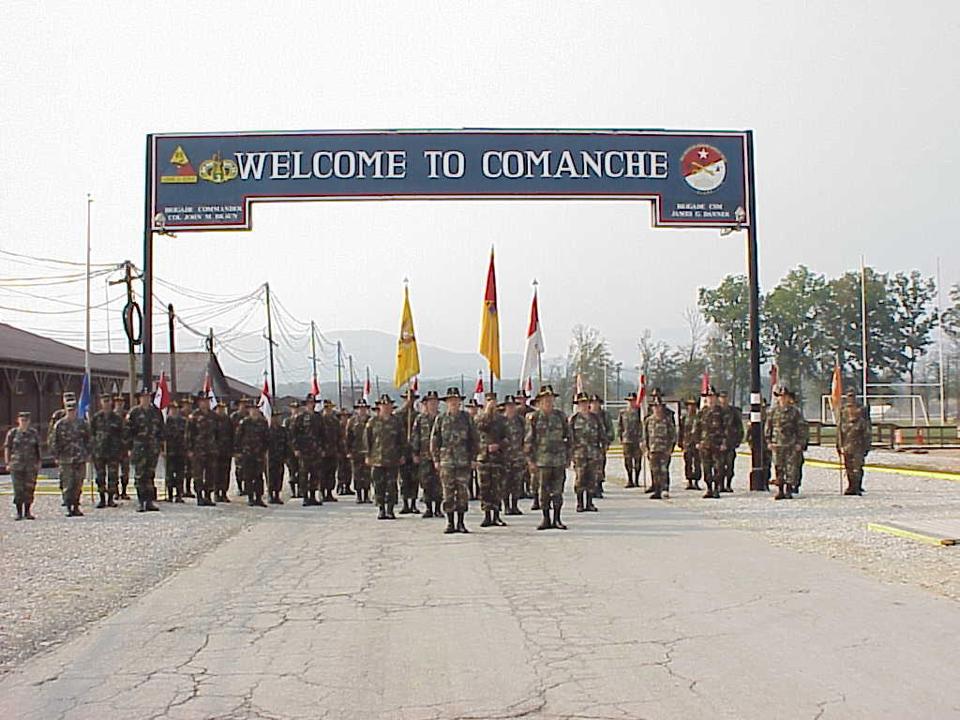 21 years ago in Bosnia near Tuzla, US military began building the US military air base (US Air Force) called Camp Comanche, which was one of the key in the Balkan. Many people do not even know of the existence of this base, and they wondered what kind of base was, what it was used and how it looked.

Our portal with a sincere respect for the US Army brings you information and photos below.

Comanche Base is the hub of flight operations in the Balkans. Troops live six to eight in a tent. There’s a cappucino bar, food court, chapel, exercise facility, movie tent and exchange store at the compound’s center. Living conditions were sparse, but basically comfortable. Most personnel were housed in sea huts (a type of wooden building) and others in tents. However, the base replaced the tents with sea huts.

Camp design began on 31 December 1995 with a site survey. Security for the site had not yet been assured, and soldiers still occupied old MIG (a Russian-built fighter plane) aircraft hangers in the immediate vicinity. Site security was a concern throughout the camp construction with the continuous presence of Bosnian children, adults and soldiers in and around the construction areas. The initial site chosen for a 2,200-soldier camp (later revised to a 1,700-soldier camp) was an open field adjacent to the airstrip, a macadam surface approximately 6,500 feet in length and 50 feet in width with unprepared grass shoulders. (The 4th Aviation Brigade wanted to use the entire airstrip for air operations.) While large enough for the camp, the initial open site had clay soil with a very high water table that engineers said would require about 60 days of site preparation, including mine clearing, before beginning camp construction. The soil conditions also complicated mine clearing operations or made them impractical.

Engineers have built more than 200 buildings at Camp Comanche. Among them are barracks with space for 2,500 soldiers, motor pools large enough to hold 700 vehicles, heliport and that could hold up to 54 aircraft. Almost five kilometers fence surrounded containers for storage, farm fuel, space for refueling, as well as the command of the army.

These facts all conspired to force a compromise in camp location and design, resulting in most of the camp placed on about 2,500 feet of airstrip and then the dining facility, laundry operation and administrative facilities on a smaller section of the original site. While certainly not ideal, the resulting design demonstrates the flexibility of the Force Provider system. The 1,700 billeting spaces; showers; field-expedient latrines; and morale, welfare and recreation facilities including chaplain, medical, sports and recreation facilities, and a movie theater were all ready and occupied by January 25 by the 4th Aviation Brigade and the 18th Military Police Brigade. On February 9, General John M. Shalikashvili, Chairman of the Joint Chiefs of Staff, toured the facilities at Comanche Base with other top-ranking Army officers. General Shalikashvili, aware of similar US Air Force bare base systems, was impressed with the Army’s commitment to providing high-quality life support for soldiers.

In 1997 Comanche Base was temporary home to about 1,000 US aviation support troops as well as their Apache, Black Hawk and Kiowa Warrior helicopters from the 501st Attack Battalion Squadron and 2nd Armored Cavalry Regiment. More than 35 guards and 17 guard towers protect the aviation support activities at Comanche Base. An Army official reports crews sustain a 96 percent vehicle readiness rate.

At Camp Comanche the aircraft of 4/3 ACR, the combined leadership of its staff and that of the 49th Aviation Brigade of the Texas Army National Guard, made up the supported unit called the 49th Aviation Brigade Combat Team (ABCT). This combined unit was responsible for aviation support throughout MND-N and many missions throughout the entire country of Bosnia as well. In conjunction with Brown & Root, a civilian support company, the 3-5 Platoon coordinated the ammunition and petroleum, oils and lubricants (POL) needs of the 49th ABCT.

The Support Squadron, 3rd Armored Cavalry Regiment, (3rd ACR), commanded by Lt. Col. Stephen M. Corcoran, provided support for their troops at Comanche while deployed to the Balkans during Operation Joint Forge. With the completion of Stabilization Force Seven (SFOR7), a Transfer of Authority (TOA) Ceremony brought change to the command and control of mission operations. Throughout this change in authority, mission readiness was maintained by uninterrupted logistical support. This continued support of maintenance, supply, transportation, and medical troops of Camp Comanche successfully upheld the continuing mission in Bosnia-Herzegovina (BiH).

During late 1998 and early 1999, Task Force Eagle received the most significant construction mission since US forces arrived in Bosnia. To improve efficiency, save money, and realign base camps, Task Force Eagle closed the Colt and Guardian Base Camps. These closures required that the entire logistics operations be moved from Guardian to Comanche Base Camp. A massive construction effort was required at Comanche that included living areas, a container storage handling area, a direct support maintenance building, a supply and service area building, 50-ton haul roads, a new dining facility, parking areas, and numerous other projects. Some of this construction had to be completed or be well under way so that the 1st Cavalry Division could move directly into Comanche and Eagle Base Camps.

The quality of life for all soldiers assigned to the LTF in Bosnia has improved a great deal on Comanche Base and throughout the entire area of operations. At Comanche Base, a new gym opened for use with state of the art training equipment and full size basketball court. Additionally, new Battalion and Company Headquarters buildings have opened and provide a great environment for work. Last, with decreases in perceived threat to SFOR personnel, morale and welfare events allow soldiers to take a break and have fun.

Engineers from Fort Drum’s, New York, took $ 1.5 million worth project for the construction of the runway in September in 1999.

When the First Cavalry Division was at Comanche Base, there was a 140,000-gallon Fuel System Supply Point (FSSP) in place. It consisted of two 50,000-gallon and two 20,000-gallon fuel bags. There were also five M969 5K gallon tankers and three HEMTT tankers. The majority of this fuel was dedicated to the division’s aviation assets. The Fuel Laboratory at Comanche Base was responsible for the quality surveillance and quality assurance of all fuel in MND-North. The laboratory had limited capabilities. The laboratory could only perform simple tests such as Type “B-1” partial (product verification), Type “B-3” partial (test for commingled products), and Type C (filter effectiveness, specific gravity, color and appearance). When other tests were required, fuel samples would be sent to Kaiserslautern, Germany.

Before the arrival of US forces base belonged to the Yugoslav Air Force.

“There is no need for this camp more,” said Swannack. “This is good news for SFOR and Bosnia and Herzegovina.”

At a ceremony at Camp Comanche, 5 September 2002, Major General Charles H. Swannack, Jr., commander of Multinational Division has officially returned control of the base back into the hands of the Federation Army.

Featured mast from 90 meters that SFOR (Stabilization Force) used to proudly raise the American flag every day, the mast was the highest in the Balkans. “Today, we will go down the American flag that will hang at this point last time,” said Swannack. “As of today, this database will belong to the Armed Forces, and will carry the flag of Bosnia and Herzegovina proudly.”

Federation Ministry of Defence plans to change its name. But “the name of the database will remember and remind you of the great contribution of troops of the United States for the enforcement of peace here in BiH.” Said Ferid Buljubašić, Deputy Federal Minister of Defence. “Thank you, the Government of the United States to this country in excellent condition, where he made so much investment. We will continue to keep it.”

Special thanks for the information and photographs; members of the US military who have served in the base Comanche, NATO, SFOR, United States Army, 1st Cavalry Division i and more.

REPUBLIC OF GAMERS Uskoro u ŽIVINICAMA!